BOISE (KID) – Chase Bank in Downtown Boise received an April Fool’s Day protest from the same group that made their way onto the floor if the Idaho House last month.

According to Public News Service, Extinction Rebellion youth held a “dance party” at the city’s downtown location Thursday, April 1. The incident was held to call out the bank for their investment in fossil fuels.

Climate change is not the only issue the Extinction Youth Rebellion has garnered media attention for. According to Idaho legislator Priscilla Giddings, (R-White) The Extinction Rebellion Youth, ignoring protocol, made their way onto the Idaho House floor March 17 under the guise of wanting to hand out “cookies and candy,” then started to hand out masks to legislators on the floor. They also took pictures of legislators without their permission.

In an interview with KID News Radio, Rep. Giddings said:

We’d just wrapped up our afternoon session and there are specific security guidelines that nobody is supposed to be on the floor of the chamber immediately following the session…but when they came over to me to ask me if I wanted a mask they started taking my picture.

While the youths didn’t ask permission to take pictures, Rep. Giddings said she really didn’t think much of the incident at first.

I had to escort them out…so I just escorted them off the floor and then I really didn’t think anything of it. Until they blasted it all over their social media. 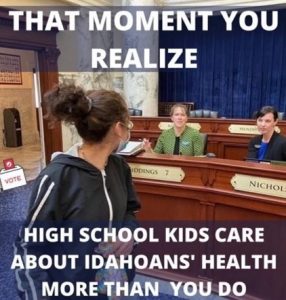 According to Rep. Priscilla Giddings, she and Rep. Nichols were called “neo nazis” online, and other organizations started promoting the meme:

…they blasted that on to social media and Black Lives matters pushed it out there. And then the worst part of all, you got the former BSU president, Bob Kustra, and a former Gubernatorial candidate, Dr. Tommy Ahlquist, And they were promoting what these kids were doing.

Rep. Giddings said there was an investigation into the event.

KID inquired about the investigation with Idaho Capitol Sergeant-at-arms Jeff Wall. The following was his response:

My only statement is, per House Rules there was no breach of the House Chamber.  An investigation was conducted by Idaho State Police and CBI Security is complete and it was considered to be a House matter.  It was turned over to us and we have dealt with it.

KID has also reached out the Extinction Youth Rebellion for comment, and has not heard back from the group yet.