The following is an article re-distributed with permission from The Idaho Dispatch. The original article can be found HERE.

IDAHO – A number of recall efforts are underway in Idaho.

However, the deadline to turn in petitions for the recall of Governor Brad Little is today.

Organizers for the recall say they did not get enough signatures and their campaign is officially over.
In total, the organizers say they got 18,093 signatures. The total amount needed was over 184,000 signatures putting the effort well under the needed amount.

In a post on the group’s social media page, one of the organizers, Jennifer Zehner said,

Here are the final numbers. Because we did not have a mass amount of signatures, there is concern that the people who did sign may be targeted. For this reason we have made the hard decision to burn the petitions and protect our network. More to come.

The decision to burn the petitions caused anger among some of the individuals in the group.

Here are two of the comments from those who disagreed with the decision by the organizers to burn the petitions.

One commenter came to the defense of the organizer’s decision by posting this comment:

Here are several images from the organizers showing the petitions and the firepit they were burned in. 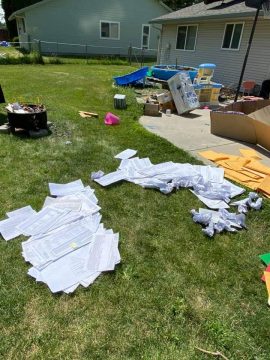 A video of the petitions burning was deleted from the group soon after its posting. One individual can be heard discussing the desire to protect those who signed the petition.

In the above quote from Zehner, she also mentioned that the decision to destroy the petitions was made to protect people from potential retribution from Governor Little.

We did reach out to the Secretary of State’s Office and got clarification that the organizers do own the petitions themselves.

They said that if the organizers decided to destroy the petitions, there was nothing in the law that prohibited them from doing so. Once petitions are turned into the Secretary of State’s Office, they then belong to the state of Idaho.

We also asked the Secretary of State’s Office if the organizers were prohibited by law from turning them in if they did not have enough anyway, they said no. The petitions could be turned in but if the amount was clearly under the needed amount, they would just hold onto them and they would be public records at that time.

UPDATE: One of the organizers of the recall effort, Charity Dooley-Myser, spoke with Idaho Dispatch and answered a few questions for us.

First, we asked her about how they felt about the effort overall and why it ultimately failed. Myser told us,

We feel it struggled to get exposure. Most media outlets weren’t interested in covering it. However, we achieved a significant goal – obtaining signatures from every single one of Idaho’s 44 counties.

Not enough individuals were willing to get out of their comfort zone and collect signatures. If only 2,000 of the 4,800 people in the Idahoans for the Recall of Governor Brad Little had taken a weekend to collect 100 signatures, we would have been on the ballot in November. We had a smaller number of amazing, dedicated patriots who spend countless hours educating and collecting signatures.

Second, we asked Myser about the decision to burn the petitions and she told Idaho Dispatch,

The optics of the method to dispose of the wet copy petition sheets was wrong and should not have been handled thus. There is no other way to say it. The petition sheets containing the names of thousands of patriotic Americans should have been handled in a more dignified manner. I can’t even bring myself to watch the video that has been messaged and sent to me too many times to count. Not only was it a lapse of judgment to do, it was an even more devastating lapse to have it blasted out on social media – especially before showing respect and honor to all of you who dedicated countless hours to this endeavor. Each of you have my sincerest of apologies. An announcement honoring and respecting the volunteers and explaining the process at the conclusion of gathering time, should have been done first thing this morning. There are no excuses for not properly addressing you all – and I pray for your forgiveness.

I cast the deciding vote in not submitting the less than 10% off signatures needed for placing the recall on the ballot. My decision fell on the side of protecting the Patriots who could very well be subjected to petty, vindictive actions by the state. And lets not kid ourselves, this is a very legitimate matter that even played a role in voters choosing not to sign the recall. But didn’t we all agree the exposure was worth it? Well yes, if it allowed us to put the traitor on the ballot – it was totally worth it. But to give the enemy a list of targets with no ability to go forward? No sir, I could not agree to that position. Our founding fathers signed pledging their lives, their fortunes and their sacred honor to a movement that changed the world. But when they signed it was the beginning of the fight. Sadly, my signature and yours and those you got to sign wasn’t the beginning because we needed much, much more. The signature collecting was the attempt to begin and we simply didn’t make it out of the gate. And yes, this causes me great frustration and disappointment, as I know it does all of you as well. But I regret none of it. Every new person I met, every conversation, the endless hours put in even before the petition was certified – it was all worth it! I will never return to the place of the hurried, distracted voter again. Instead, I will be passionately involved in civics until the day I go to be with the Lord.

Finally, we asked Myser if she had any other comment she wanted to make, and here is her response in full:

Don’t turn on each other!!! This is not the time to second guess each other, nor is any time the right time to attack one another. Whatever frustration, anger or disappointment you are feeling – please channel it into staying in the fight against the rot infecting our Republic! It is important to note that the established political party is Idaho is being lead by the kinds of people who do not believe we should continue to value our freedoms. The R leadership is rotten to it’s core! It will take all of us working together for an extending period of time to change the direction Idaho is currently on. I will be on of the ones trying to correct our course – and I beg of you to join with me. There will be sacrifices to be made, but they won’t be as uncomfortable as living under socialism or a global world government. Thank you, for being part of the citizenry that cares and are willing to take action. I pray the grace and peace offered to each of us through the Cross has found a place in your heart.

Governor Little’s office has not yet responded to the failure of the recall effort.

If he does respond, we will update the article accordingly.