Today the House member made a motion to undo a veto from Governor little on House bill 214. This law would have changed existing law to revise the responsibilities of the state tax commissioners. Specifically, this legislation would have changed the law to require commissioners’ approval when the chairman makes certain administrative decisions. The Governor chose to veto this bill a few weeks back because he felt like the bill added more red tape to the Idaho code which goes against his beliefs.

This piece of legislation would require parents/guardians to sign permission slips for their children to participate in school clubs. It also would require the school board’s approval and publish annually a list of all school clubs, advisors, and a description of the
club and activities. This bill was sponsored by Rep. Barbara Ehardt, R-Idaho Falls. The sponsor stated that this bill is a parental rights bill and that parents should be able to follow what kinds of activists their children are participating in. Rep. Rubel felt that this bill was too restrictive and that parents don’t need to be the police of their children. There were other concerns about whether or not this bill either cause more liability for schools or lessen it. In the end, the bill passed 52-18.

This legislation changes the Idaho code by repealing existing laws relating to the rape of a spouse. The bill passed the House unanimously.

This piece of legislation is sponsored by Senator Steve Vick, R-Dalton Gardens, and Rep. Jim Addis, R-Coeur d’Alene, and addresses ballot initiatives. This bill would require that to get an initiative on a ballot, signatures would need to be gathered from all 35 Legislative Districts instead of just a few.

There was a very lengthy floor debate for this piece of legislation. They started to debate the bill then abruptly went into recess till 2:30 pm then began to debate the bill again. One side of the argument felt that passing this bill was in violation of our constitutional rights and that by passing this piece of legislation, it would be harder to conduct a ballot initiative limiting Government accountability.

Another argument was brought up that we shouldn’t require all 35 districts to agree because all of the representatives in the body don’t agree on things. On the other side of the argument, many were expressing their support for the bill and giving all of Idaho a voice, not just 3 1/2 counties. Currently, how ballot initiatives s are currently set up, signatures could be gathered in Kootenai, Ada, Ca 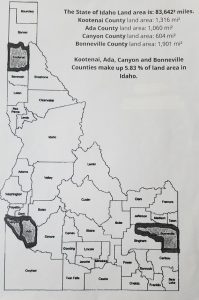 nyon, and Bonneville counties and get on the ballot. These counties only represent 5.83% of Idaho land.

Some even mention that this would be compromised voting for this bill because they don’t believe in ballot initiatives altogether. Idaho is 1 of 24 states that have ballot initiatives. This bill did pass in the end, 51-18. I’ve had an unpopular opinion about this bill from day 1, cause I see this bill gives all of Idaho a voice rather than take it away. This bill gives a wider range of individuals a say instead of a small condensed area. Important to note: this bill does NOT increase the number of signatures required and doesn’t require signatures to be gathered from every county. Simply from every district.

The Idaho House of Representatives brought forward Senate Bill 1179 for a debate. This bill is an appropriation bill that determines the budget for Idaho’s Higher Education Institutions.

In the introduction of this bill, the sponsored Rep. Paul Amador, R-Coeur d’Alene, urge the member’s red light on his own bill because he wanted it to be sent back to JFAC for further consideration. Though many of the representatives were confused, that did not keep them from debating the bill and making suggestions of things they would like to see added to the next higher education budget. There was controversy on the floor some of the legislators did not feel comfortable voting because of Social Justice Ideology they feel is being pushed at the school. Other Senators felt that passing this bill would be okay because they want to encourage diversity in ideas. During the debate, one, in particular, stood out to me. Rep. Brent Crane, R-Nampa stood up to debate against the bill. He had a letter to read from a student attending BSU about their experience. Note that when they are going to read directly from the text the Hosue rules require that they ask permission to read the source. When Crane asked to read the letter, Rep. Chris Mathias, R-Bosie, objected to further reading. Crane then made a motion to the whole body to be able to read the letter from the BSU student, the motion was carried 54-14. The letter was about a music student’s experience, and how he was being taught that black composers are better than a white composer and that music needed to be political.

Rep. Bruce Skaug, R-Nampa, is testimony also talked about how a caucasian girl with curly hair was told that her naturally curly hair was “cultural appropriation” and she had to walk through the tunnel of shame where she was being sworn at, she was there to get an English degree. Other legislature brought up more stories but many students are scared to speak out in fear that they might not be able to get their degrees. Ben Shapiro suggests that you go to school and don’t question things until you are out of school. It’s crazy stuff. Some debate that they want to see this bill split up into multiple bills. There were so many trying to debate this bill that a motion was finally made to end the debate, the motion carried 50-20. Then bill did fail, as requested by the sponsor, 12-58.

This legislation sponsored by Sen. Kelly Anthon, R-Burley, was sent to the House floor. The legislation intends to add needed changes to Idaho’s Disaster Preparedness Act, in Idaho Code Section 46-1008, the section that handles the governor’s emergency powers. This legislation includes limiting how long Idaho can be in a state emergency, it would declare all Idaho workers are essential, protect for rights to assemble, freedom of religion, and gun rights; and restore checks and balances. Passed the house 54-16.

The Senate State Affairs Committee had a full hearing for the ballot harvesting bill sponsored by Rep. Mike Moyle, R-Star. This legislation was sent to the 14th order for possible amendments. Moyle says he wants to change the language to make it just a misdemeanor if someone is carrying less than 6 ballots, instead of a felony.

This legislation cleared Senate State Affairs with a do pass recommendation. This legislation would amend Idaho’s Informed Consent Law to provide information specific to babies diagnosed with Down Syndrome. What this bill would do is ensure that the Department of Health and Welfare would provide parents of children diagnosed with Down Syndrome with information about the resources available, in both the public and private sectors that would help support a decision to choose life for their baby.

This piece of legislation was sent to amending order. This legislation would prohibit the use of state tax dollars to be used to fund abortions. This bill would not apply to federal funding. There were just a few changes made to the bill, wording adjustments regarding Medicaid, and also added penalties to make it consistent with other statutes on misusing public funds. The committee was concern from a few members of the committee that the language that said abortion providers or their “affiliates” would be prohibited from receiving funding was too vague.

This piece of legislation, sponsored by Representative Barabra Ehardt, had a full hearing in the Senate Education Committee this afternoon. This legislation would require that parents would need to opt-in their students to sex education instead of opting their students out. House Bill 249 passed 56-12. This piece of legislation is very similar to a bill she introduced two years ago that didn’t make it through the legislative process. Bill failed the Committee.

This bill had a hearing in the Senate Transportation Committee. This legislation would create a committee to study giving undocumented people driving privileges, passed 28-7.

On the floor today, Sen. Christy Zito, R-Hammett, urged the Senate to reconsider Tuesday’s vote to kill House Bill 294a using parliamentary procedure. Originally, Sen. Zito voted against HB 294 the day previous but reconsidered her opposition to using federal dollars for the grant program. The motion to reconsider failed on a 15-20 vote.

Note that if Sen. Zito voted yes originally, the vote would have tied the vote, 17-17,  and Lt. Gov. Janice McGeachin would have needed to break the tie.

The Senate has passed Hosue Bill 126 that addresses industrial hemp. It passed 30-5. It now heads to the governor’s desk and would make Idaho the final state to legalize industrial hemp production.

To read all our notes from the 2021 session, click HERE.