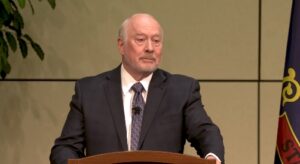 IDAHO FALLS — Attorney Bryan Smith of Medical Recovery Services appeared on KID NewsRadio Tuesday morning to respond to what he calls a ‘smear’ effort by Melealeuca CEO Frank VanderSloot. The businessman, along with his wife Belinda, pledged $500 thousand in April to create Idaho Medical Debt to defend individuals who have been charged significant attorneys’ fees that dwarf the original bill. Another $500 thousand was pledged on October 10th to continue the effort. The vast majority of Idaho Medical Debt’s cases originated with MRS.

VanderSloot says it all started when Medical Recovery Services sought attorneys fees from a Melaleuca employee who originally owed a $294 medical bill.  The debt collection company attempted, unsuccessfully, to collect nearly $6,000 in attorneys fees. Once VanderSloot launched the consumer defense fund, he says hundreds of similar cases came forward with their stories.

VanderSloot says while reviewing accusations by the defendants, attorneys for Idaho Medical Debt noticed patterns of behavior by MRS: Defendands being told they don’t have to show up in court, or being encouraged not to get an attorney. Other accusations included MRS not providing adequate documentation of debts they were trying to collect, and refusing to back down even when a medical provider made a billing mistake. Smith rejects these and similar accusations.

As you can hear in the interview below, Smith strongly defends his practice and asserts VanderSloot’s claims have been without merit.

Vandersloot, who recently hosted dozens of legislators to discuss potential medical debt collection reform, is scheduled to be interviewed by KID NewsRadio on Thursday, October 31st, at 8:35am.